Are You Complimenting God? 9 People of the Bible With Unbelievable Faith 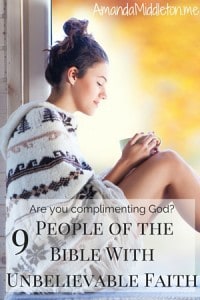 Welcome to AmandaMiddleton.me! Check out my most popular posts while you are here, located in the sidebar. If you like what you see, subscribe here for free updates, or you can “like” my Facebook page here and receive new posts in your news stream. Thanks for visiting!

My faith is my backbone of my very being BUT, it is tested A LOT! Or should I say? I test IT A LOT! You see… I tell myself and others that I have all of the faith in the world, but I for sure do not have the faith that I admire so much in others of the bible.

It is very important to surround oneself with people who can impact your life for the good and not for the bad. I want to surround myself with these people of the Bible and people like them everyday. Don’t you?

The only thing I can do is keep moving forward, keep the faith I do have and strive for more. I believe having faith in God is the ultimate compliment to Him. You are saying, you trust Him in every aspect of your life. What better compliment is there than that? I want to compliment Him in the biggest possible way. Don’t you?

Thanks for joining me for the first Faith filled Sunday!

Where is your faith level?

Meow! Wear your favorite outfit and wear it well!

In life we are going to get rejected. We are going

I have a confession to make….. My husband and I

My response when Chris tells me that I have anothe

<<Depression & Anxiety>> So many times we beat ou

No Carson, I have no shame! Now excuse me as I go